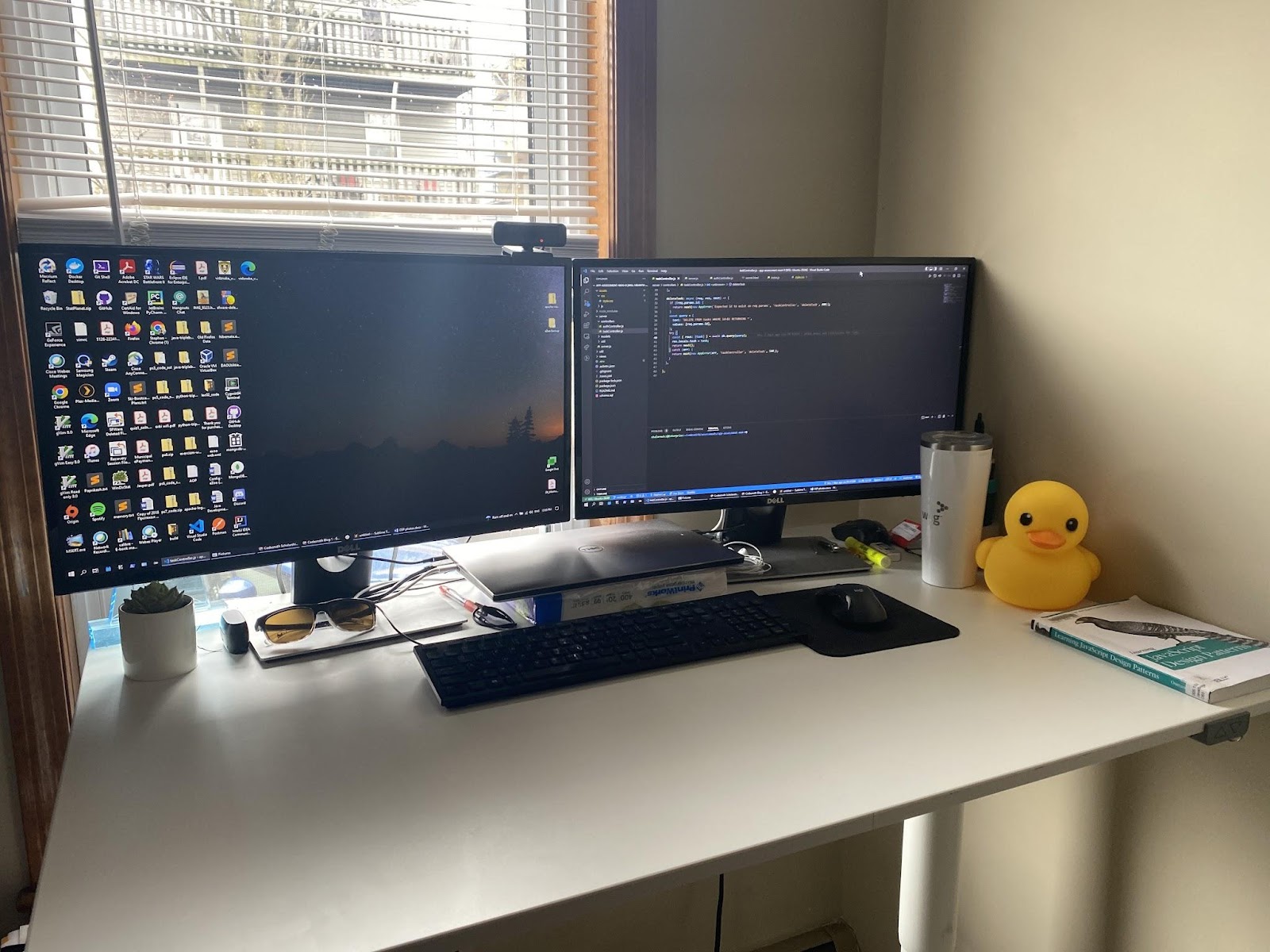 As one of my cohort mates excitedly informed us over Slack, we have officially reached the halfway point in our Codesmith journey. In looking back on the first four and a half months of the Part-Time Remote Immersive program (or PTRI as we like to call it) and trying to formulate a typical day in PTRI, I realized just how different my days have been. Between three different time zones and five different cities, it’s a wonder how I could possibly have any routine at all. But looking back at my time, a few things have remained constant regardless of where (or when) I’ve been.

My home set up

CODING FROM ANY LOCATION

To paint a better picture, I’ll start with my time in Salt Lake City, which ran from Week Four of the program through Week 11. During this time, we covered the bulk of the core curriculum, so there was a lot of time devoted to reading through documentation and working on tutorials.

You may wonder why I was in Salt Lake. Well, going into Codesmith, I knew that the program was going to be a large commitment, on top of working full time at my current job. I also knew that I would need a break from sitting in front of a computer all day, and as someone who loves to ski, I saw no better place to spend the winter months than Salt Lake. And let me tell you, taking a break in the middle of the week to ski on a bluebird day is the perfect stress reliever.

As far as the typical day went: I’d have an early start, since I was working East Coast hours. I was usually able to find at least an hour or two in the morning to read up on some documentation, or to go through a tutorial on whatever topic we were covering that week. And when I was able to find more time, I would catch up on the backlog of articles that I’ve opened or favorited in the past few weeks (these endless amounts of tabs actually led to our idea for the Junior Hackathon — a tab manager called “Hoard”). 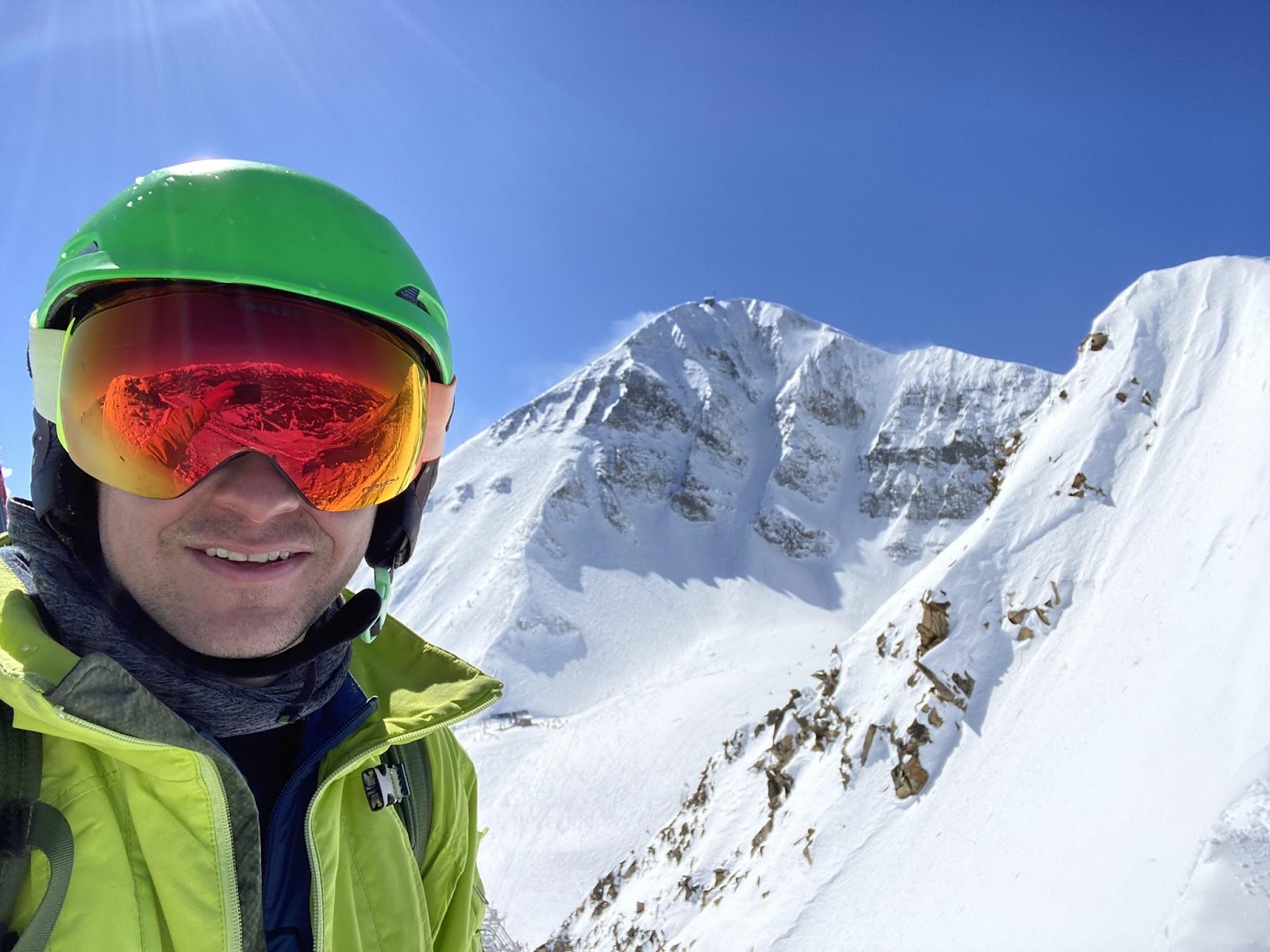 The perfect day off

Once the work day wrapped up, it was super important for me to get outside, walk around, and get some sun to escape my basement rental. I set a fairly firm rule for myself: in those two and a half hours between the end of the work day and the beginning of class, I wouldn’t do anything work or Codesmith related. Were there exceptions to this? Yes, but in general I stuck to as much as I could.

These breaks were important for more than just getting outside. I would also spend a lot of this time catching up with my girlfriend, friends, and family over the phone. I’d also take the time to cook a more elaborate dinner—I did anything to take my mind off things, and prevent burnout over the course of the program.

As a result, I felt refreshed and focused for class, even though I had worked a full day. When the time came for class, I was ready to tackle whatever lecture, skill builder or challenge.

INSIDE THE JUNIOR PORTION

A typical week of the Junior Portion would start off with one or more amazing lectures, and then we would jump into pair programming sessions. These sessions would start off with getting to know your new partner—not just their work style, but also on a more personal level, developing friendships (something that Codesmith fosters very well). Together, we would work through whatever blocks we encountered, or explore each other’s solutions if we had different approaches in mind.

In addition to all of the lectures and challenges packed into Junior Portion, the day would typically wrap up with awesome Tech Talks or presentations from our Mids and Seniors. At first, a lot of this material went over our heads, but as we grew and progressed as engineers, this material started to click and became relatable.

MOVING BEYOND THE JUNIOR PORTION

As the Junior Portion came to a close, and as we geared up for the project phase in Mid-Portion, I also had a scenery change. I started with a quick trip to Chicago to visit my girlfriend, returned to the mountains for a few weeks, and then finally ended up back home in Boston, just as our Solo Projects were wrapping up.

While the scenery around me was changing, the change in my daily routine had more to do with the switch to working on projects. Gone were the days of only reading docs for a specific unit, and in came the days of finding time to work on the current project, researching blocks we encountered while building our first applications.

At the end of these information-packed days, I tried to pick up a book and take my eyes off of the screen for a bit (which, If I’m being honest, is a lot easier to do on Mountain Time than Eastern Time).

You’re probably thinking that this schedule sounds ridiculously busy, but truth be told: finding time away from my computer has helped me stay refreshed and focused, therefore allowing me to attack each day in PTRI with the same unrelenting energy on my path to becoming a senior engineer.

Read about another PTRI resident’s experience with finding work-life balance in this blog post by Kailee P.

Codesmith welcomes residents from a wide range of backgrounds, career paths, and perspectives to...