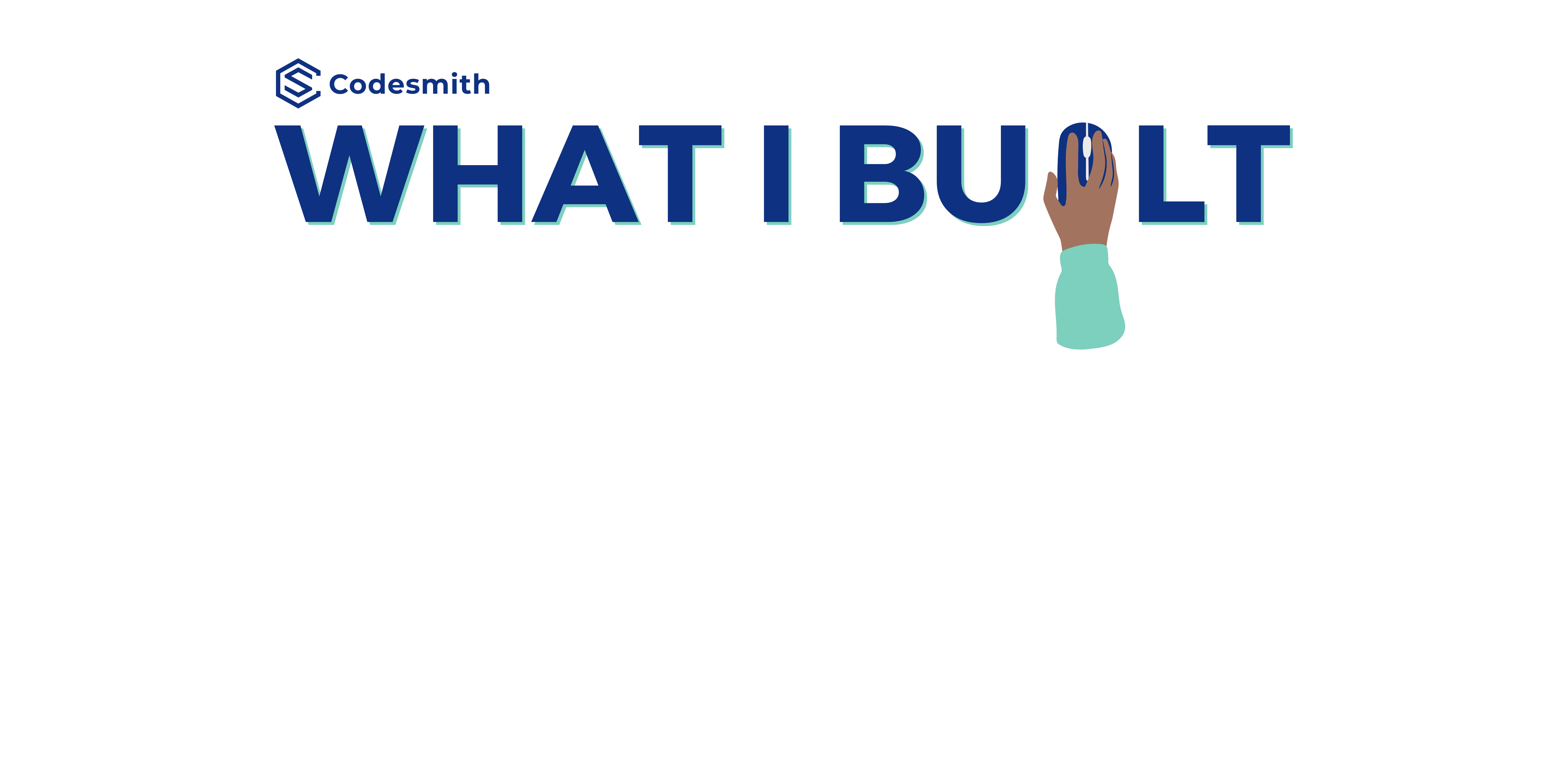 Codesmith welcomes residents from a wide range of backgrounds, career paths, and perspectives to our software engineering immersives.

Though some residents join Codesmith with a background in computer science or tech, others enter from completely varied fields like healthcare, marketing, or interior design. But, regardless of background, everyone enters Codesmith with a common goal – launch a career in the tech industry as a software engineer.

It took Ashley Pean until her senior year of college, majoring in an unrelated field, to realize she shared that common goal.  Having taken one semester as a Computer Science major her first year, Ashley’s attention turned back to tech and engineering as a potential career.

“I was experimenting with different ideas, and realized one of the only things I truly enjoyed was computers and technology,” she remembers. “So I decided to do a load of self-teaching, using free resources online and watching YouTube videos. There’s such a wealth of information, though, and as a beginner you have no idea where to start.”

Luckily, Ashley found Codesmith on YouTube through a panel discussion with Codesmith CEO Will Sentence.

“I loved his energy talking about coding,” says Ashley. “All other coding schools sent HR reps, but Codesmith’s CEO did the talk himself. That said a lot to me. He seemed in a different headspace to everybody else, there for a different reason, and that really motivated me to check it out.”

Determined to pursue a career in tech, Ashley started preparing for Codesmith’s Software Engineering Immersive,  consuming as much Codesmith content as possible online and taking CS Prep. In addition to being accepted into Codesmith, Ashley also applied for and was awarded the Black Engineers at Codesmith Scholarship, covering 100% of her immersive tuition.

“Inspiring, confidence-building and – at times – stressful too!”

Ashley chose Codesmith’s Part-Time Software Engineering Immersive program as she was finishing up her degree and (through some superhuman feat) doing a three-month engineering internship alongside Codesmith.

“It was a lot,” admits Ashley of the experience. “Intense, but absolutely worth it. I was juggling a lot of stuff at the same time, so I was really grateful for the part-time course as it allowed me to do that. It wouldn’t have been possible otherwise. I managed to fit it in around my lectures, cramming in the evening, crashing into bed, then doing it all over again.”

While juggling several ongoing projects outside of Codesmith was tricky to manage, Ashley found her time at Codesmith to be very well-structured and organized. She received her entire schedule in advance, covering everything from build projects to social time.

“I thought some of the stuff was corny to start with, like the game nights, certain rituals like that,” admits Ashley. “But I decided to throw myself into it. And, I’m really glad that I did because I got a lot out of it. It’s amazing how close a bond you can build with people you’ve never actually met in person.”

Ashley still keeps in touch with her Codesmith cohort mates on a regular basis.

“One of my friends got a job the other day and we were all celebrating down the phone,” Ashley says. “It’s the best culture I’ve ever encountered at any organization, with the support that you get at every bit of the journey that you’re going on – both during and after the program.”

'Learning how to learn' and finding a specialization

The Open Source Product at Codesmith is an opportunity for residents to become T-shaped developers – highly skilled in one coding language and adept at many. Though Ashley subsequently honed in on front-end development as her area of expertise, her Open Source Product (OSP) had a back-end focus.

Her team created a debugging tool through which developers can see every single request topic on a server, and identify exactly where an issue is within their entire application.

“It is a super cool tool,” Ashley says. “It helps you debug, and it’s also a documentation tool so you can onboard new developers, as they can use it to see the entire structure of your whole application – both visually and by looking at the actual code.”

Though her OSP focused on the back end, Ashley was able to discover her love for front-end development in Codesmith’s additional four projects during the immersive. By leaning into the ‘learning how to learn’ concept that Codesmith emphasizes, Ashley became adept at learning different languages and technologies quickly – a skill applicable to a career in software engineering.

“I can challenge myself to see how fast I can learn new technologies to the point where I’m actually functional and building something useful out of it,” explains Ashley. “That’s helped me immensely, as when I started my new role I didn’t know a single technology that they used. That was overwhelming to start with, but thanks to Codesmith I know I can dive into something and learn along the way – which gave me the confidence to accept the job.”

Alongside building both back-end tools and front-end apps, Codesmith also taught Ashley how to lead projects – managing roadmaps and resources, allocating tasks to team members, and tracking progress throughout.

“People underestimate how difficult it is to manage a technical project – who is going to do what, and how long is it going to take,” she says. “Getting some skills in that particular vertical has really helped me a lot in my current role too.”

Putting the non-technical in technical teamwork

Alongside all of the technical training, Ashley notes that collaboration among the Codesmith community was just as valuable as the technical instruction.

“Learning how to learn, learning how to teach, and learning what it means to actually work with people in the process of building something – lots of folks don’t think about that as a software engineer,” she explains. “Yes, you have to solve problems, but most of them involve working with people and cooperating – to identify that problem and work out the solution.”

It is a widely-held misconception that software engineers are solitary people. Early on in her Codesmith journey, however, Ashley identified that emotional intelligence and the ability to work in a team were actually vital prerequisites for being a successful engineer.

“I think people have this impression that a developer is some nerd that doesn’t talk to anybody and just codes in a dark room all day… and I also do that!” Ashley jokes. “But, mostly I have to talk to people a lot, communicate with them, and build relationships to get the work done well.”

Codesmith emphasizes collaboration and community building throughout the immersive during pair programming, projects, and non-coding activities. These experiences taught Ashley that there is more to being a developer than technical know-how.

“It was basically being in a situation with, like, twenty strangers and saying ‘hey, let’s go build some stuff!’ Ashley recalls. “But that really helped me to develop the ability to form relationships, sync with other people’s expectations and various levels of knowledge, and refine my communication skills.”

The working relationships Ashley built within her Codesmith cohort had a profound effect on her experience, both during the program and following it.

Life after Codesmith: jobs, goals, and side projects

After completing the Codesmith immersive, Ashley stayed on for a three-month Codesmith fellowship during which time she landed a job as a mid-level Software Engineer at Eventbrite. On top of her full-time role at Eventbrite, Ashley is now a Codesmith Technical Interview Mentor, supporting Codesmith applicants in their admissions journeys.

“It took some of my friends a year to find a job from other bootcamps and coding schools, as they can struggle to place students,” Ashley says. “That’s what makes Codesmith stand out from everyone else. It gives you the tools to succeed in the industry – supporting you to not only find a job, but to find a top job, fast.”

With the Black Engineers at Codesmith Scholarship and finding a great job soon after graduating, Ashley is now more professionally fulfilled and financially comfortable than she ever has been. She is continuing to hone her craft, as a young engineer with her whole career ahead of her, and (as always) she also has a few life projects and side hustles in the pipeline.

“I honestly cannot overstate how much Codesmith has genuinely changed my life,” Ashley says. “I’m now looking at buying a house with some land, and perhaps starting a mini farm. That’s something I never expected.”

Kickstart your own life-changing journey with Codesmith’s Software Engineering Immersive programs, or build up your coding skills through our free JavaScript learning resources.

We look forward to welcoming you to the Codesmith community!

To help our goal of diversifying the tech industry and empower Black students to pursue careers in...
Read More

Codesmith aims to create a space where people from all walks of life feel welcome, have equal...
Read More

​​Before attending Codesmith, Daniel King was a high school teacher. Now, he works as an...
Read More