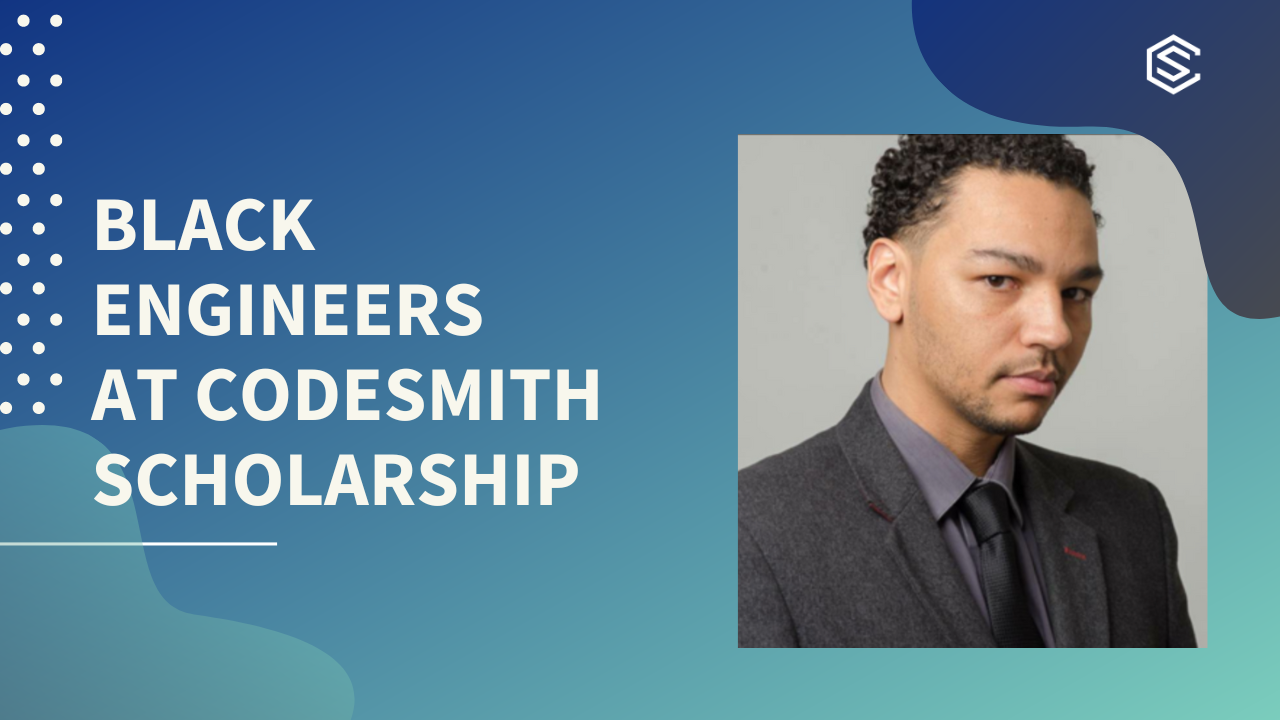 “The Black Engineers at Codesmith scholarship allowed me the opportunity to take a deep, intensive dive with a cohort of people into learning how to use web technologies to build various kinds of software within a constructive team environment. This has enabled me to become a better developer who can compete for software engineering job opportunities."

It took me three attempts to get into Codesmith. I vividly remember before my first technical interview cramming in my car the morning of in the hopes of solidifying that much more information in my brain to pass. I had no idea what to expect, so I recall just reading Kyle Simpson’s “You Don’t Know Javascript Yet” excellent online book as that was my early resource for learning Javascript.

I don’t think I had much experience actually coding out solutions to algorithmic prompts, but I had an understanding of programming principles and of some of the quirks of Javascript. One thing I remember keeping in mind was not to get frustrated if I hit a block because that could be one reason Codesmith would not accept a potential student.

As it turned out, I needed to contain my frustration and embarrassment a lot during that first interview. I answered the first prompt easily as I just needed to declare a variable and set it to a numerical value. After the 20 seconds it took me to do that, I spent the entire next 49 minutes and 40 seconds of the rest of the interview trying to figure out how to write a for loop! I remember feeling bad for wasting the interviewer’s time and even offering to leave early as I was not able to figure out a solution.

He assured me that everything was okay and even offered some guidance to lead me in the right direction to solve the prompt. Looking back, I had no business even being in the room, but I suppose it turned out to be a positive in that I learned what to expect my second go around. The interviewer offered me advice on resources to use to improve and encouraged me to schedule a second interview.

Before that second interview, I took CS Prep, answered a substantial portion of the prompts on CSX, and solidified my coding ability using Codecademy. I also took a workshop on how to pass the Codesmith technical interview, which offered a ton of practical advice on coding interviews.

By the time the second interview came along, I definitely knew what to expect and felt cautiously optimistic about my chances. At that point, I had been learning programming for around five months; before that, I never even used a proper computer as my phone was essentially my computer.

I heard that if a student could answer six questions (including a recursion and closure question) then there was a good chance of that student being accepted. Though I came up short on that second attempt, I did far better than my first try. I felt that it just wasn’t my time yet, but I also felt a little deflated after having done so much work up to that point. This was also at a time when I became aware of the potential that I could get a full scholarship in lieu of the worldwide protests after the murder of George Floyd.

I became disheartened that I would not be one of the students to get that scholarship that I desperately needed as there was a global pandemic which caused me to be unemployed and unable to afford tuition at that point. After sulking for a couple of months, a manager at Codesmith encouraged me to schedule another interview.

I remember seeing someone on the CSX Slack channel mention that they were going to give a mock technical interview to a potential student. That was a turning point for me as I did not even know there was even such a thing up until that point.

I sent a message out to everyone in the CSX Slack channel asking if any recently admitted students would be willing to give me a mock interview as I was preparing for my third. Luckily for me, someone who became very instrumental in my journey to and through Codesmith responded. Not only did he give me a mock interview (he eventually gave me three), he also taught me how to technically communicate during an interview in a conversational way to let the interviewer know my thought process during my solutions.

He had me record myself answering every CSX problem and re-watch the recordings so that I could see for myself how I sounded while coding out implementations. From there, it became a matter of timing myself so that I had ample time to get through to the closure and recursion problems which I know I had to solve.

By the time I took the third interview I had already had the experience of three mock interviews and two real ones (in addition to hours of recorded screencasts of myself answering algorithmic problems) that I felt fully prepared.

The interview itself was surprisingly not as challenging as I expected (probably because of all the hard work I had been putting in) and I got word of my acceptance (and the full scholarship!!!) not long after.

There are some truly sympathetic people who helped me get into Codesmith (namely the manager who encouraged me to take the exam again after not passing twice and the recently admitted student who went above and beyond the call of duty in helping me prepare) and I’ll always be grateful for their help and motivation.

Codesmith aims to empower all their residents with confidence and a supportive environment to flourish in. Read this blog about another resident’s life changing experience developing a growth mindset during her journey to Codesmith.

Codesmith aims to create a space where people from all walks of life feel welcome, have equal...

Codesmith welcomes residents from a wide range of backgrounds, career paths, and perspectives to...

To help our goal of diversifying the tech industry and empower Black students to pursue careers in...