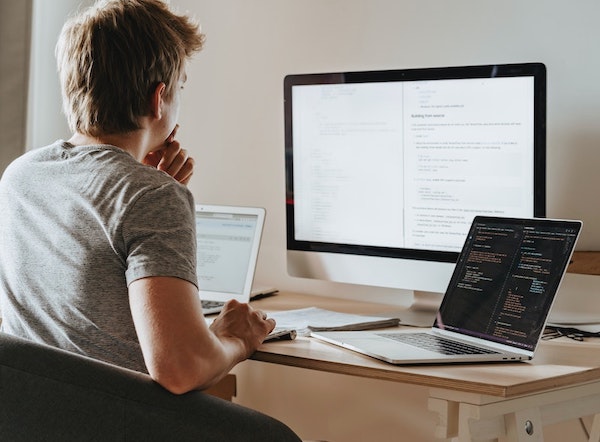 “I needed options, and I needed them immediately.”

Covid-19 had wreaked havoc in some form on so many people, and I was no exception. And before I go any further, I want to acknowledge that I am incredibly lucky that, although things changed drastically for me, the overall health of my friends and family and myself were left unchanged and we were largely able to continue living quasi-status-quo after making the necessary covid-related adjustments. I was incredibly grateful then, and I still am now. But with gratitude being fully acknowledged, things were changing fast and I was wildly unprepared. Also, there will be a wildly liberal usage of parentheses for anecdotal statements (prepare yourself).

The job I had before covid (hereinafter referred to as b.c.) was a delightful, awe-inspiring, and creatively stimulating first job, perfect for a mid twenty-something who took a victory lap (or two) in college after changing majors his junior year from a STEM field into the fine arts. I had landed in an ideal space that allowed me to live in NYC, make new friends, travel the world, entertain clients, and even use my creative musical outlets on the job. I was ecstatic to be where I was and truthfully was blissfully ignorant to the “where do you want to be in 5 years” question I admittedly should have asked myself. Instead, I frolicked. Do I regret it? Nope. But that’s neither here nor there.

Once Covid hit and my job was eliminated, I quickly realized that thing that someone had mentioned a couple times here and there was now turning out to be true; A B.F.A in music technology was not the most employable degree out there. I spent months looking for a job that would not only pay the bills but that would also be mentally stimulating enough for me to work from home and not lose my mind. I applied for jobs that I didn’t really want for months to no avail (thank goodness?). Alas, I decided it was time to get serious and think about changing careers.

My parents had always, let’s say, “gently encouraged” me to stick with my first major in the STEM field as a fall back plan if my more ideal plans of working in the music industry for the rest of my life didn’t quite pan out (joke’s on them I got a whole year in before it didn’t quite pan out). I could hear their poignant yet somehow excited voices telling me that they told me so. The excitement in their voices came from me tossing out the idea of learning to code.

RELATED: CODESMITH ENGINEERS ARE MAKING A DIFFERENCE DURING COVID-19

I had gotten the idea from a friend of mine who had recently graduated from Codesmith and even had a fellowship with them before going on to starting his shiny new (well-paid) exciting career in software development. I had known him in college and knew that there was not a vast difference between the two of us in terms of technical backgrounds and experience and I thought to myself, “this could be a really great opportunity for me to change my life for the better”. So it was sometime during the beginning of June that I started using CSX to start teaching myself JavaScript to see if I would be interested in doing this as a potential career move. I was immediately taken back to the one C++ spring course I had taken in 2017 to finish out my technical requirements for my major in entertainment technology. That was notoriously one of the harder introductory classes at my university and I remember that despite the hearsay being unequivocally true, I actually loved it. I even got an A in that class. I remember feeling like my mental acuity had noticeably improved as I was using my analytical problem solving skills and challenging myself much more and to my surprise, I was into it.

Fast forward to this past June when I started CSX, I found that same feeling. Utter frustration for hours on end trying to get “JerryKramerGeorgeElaine” to print to the console with just one call to a function called “Jerry”, and then extreme elation for 10 minutes when I finally got it to work. Then, on to the next problem. It’s a silly process but it really is so rewarding to feel yourself struggle with and then ultimately surpass mental blocks.

So this continued for a few weeks while I naively thought that I would be able to join the next cohort that was starting at the end of July. I applied with a couple of weeks to spare; my friend had given me the advice to do so because then, if rejected, I would have time to re-apply before the deadline passed. I went through the essay portion and the nontechnical interview portion and was starting to get really excited! Everyone I had spoken with was very friendly and knowledgeable and shared with me pretty much any information I requested.

Finally the big day came around - the technical interview. Pause for dramatic effect. Yeah, I failed. I knew I was going to fail maybe about 10 minutes into the hour long interview. I was flustered by the process of having someone witnessing me do live coding and I was predictably, unable to gather myself and focus on solving the actual problems at hand. Because I knew that I was going to fail, I was not really hurt by the news when I received it a couple days later. Instead, I took their thorough feedback and I ran with it. They told me I needed a stronger grasp of the JavaScript fundamentals and that I needed to practice coding with a partner. Apparently they could tell that I was flustered. They also suggested that I take their CS Prep course which I was admittedly, not very willing to do at first. So I kept working on my own for a while and then I realized, if I wanted to show them that I was serious about this, I would need to take the CS Prep course and maybe I’d learn a thing or two while I was at it.

RELATED: HOW TO BEST PREPARE FOR THE IMMERSIVE: A DEEP DIVE INTO CS PREP

Because of the timing of the available courses, it was clear that I would not be accepted into the cohort I had originally hoped for and that I would instead need to apply for the next one that started at the end of August. That gave me a little bit of time to work on my own and also complete the upcoming CS Prep course in time to apply for the next available NYC cohort (with some help from a gracious deadline extension for those enrolled in CS Prep at the time of the deadline).

So the way things worked out, I actually took my second technical interview only 3 days into the CS Prep course. Long story short, that was not enough time as I failed… again. That time it hurt. I had worked on the suggestions I was given and even enrolled myself in the CS Prep course knowing I would not get to complete it before the date of my next technical interview. I was pretty confused as to why I wasn’t in but they told me that I was close and that I should keep trying. So, after a mild existential breakdown regarding all of my life choices (funny how that one time I accidentally slapped a strange man’s butt as hard as I could when I was eight because I thought it was my dad suddenly became relevant to my brain but, here we are I guess?) I picked up the pieces and kept going.

I finished out the CS Prep course and applied one last time, knowing that if I didn’t get in, I would really have to consider if this was the right choice at all for me in the first place. Well, as you might have guessed, I got in! The excitement was unbelievable, I had succeeded in something that knew would have a vast impact on my future and my opportunities and now all there was left to do was finish (survive) the program. I knew that it would be hard but I was ready for it. I knew that challenges are where growth comes from and I knew that I needed to grow if I wanted to reach my goals of finding a stimulating and interesting career full of opportunities in a relatively short amount of time without going back to a university.

The journey continues as I write this post but I can say with confidence that the decision to join Codesmith was definitely one of the better life decisions I’ve made (much better than that one time I thought I could just skip my apparently mandatory eighth grade graduation rehearsal ceremony). Here’s to Codesmith and better decisions! (Don’t worry, they called me and I rode my bike to the school and made it just in the knick of time and I did go on to graduate from the eight grade 😎.)

By the time Codesmith Immersive students graduate they make lifelong friendships with their cohort mates. How does this happen? Read here.

One of the many things that distinguishes Codesmith grads in the job search is the sophistication of the projects they build during the program. Codesmith’s recent grad Taylor shares insights on what goes into building each project and the impact they can have on your journey of becoming a Software Engineer. Learn more.

How to Best Prepare for the Immersive Program at Codesmith: A Deep Dive into CS Prep

Codesmith Engineers Are Making a Difference during COVID-19

As the COVID-19 pandemic spreads around the world, people increasingly turn to technology companies...